Yeah, I just can’t get enough of the Patriots right now. Since the game on Sunday, we have watched endless hours of highlights, interviews, and post-game recaps. We listened to WEEI sports radio all day Tuesday in the house. We watched the complete 4th quarter again on DVR, Gronk on Jimmy Kimmel, read all the Facebook posts, and of course, today watched the parade (on TV).  It’s crazy, but it’s fun! 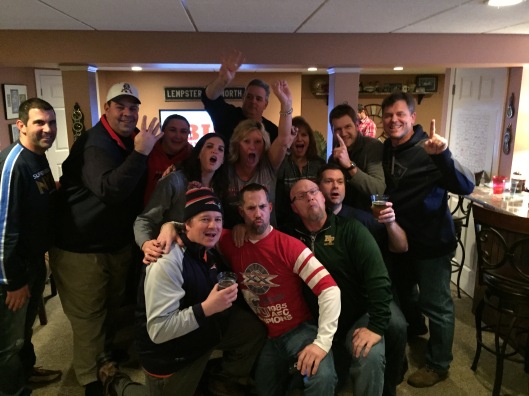 Our Annual Super Bowl Party was a blast!

I don’t know why I’m so addicted to it, it’s not like the Patriots are an underdog in the league.  They are awesome and deserved to win.  But I like hearing about the players, their back stories, and hard how they work.  I like the emotion of it.  Plus, there is so much that goes on behind the scenes it fascinates me.

One of the best things we’ve watched was Showtime’s ‘Inside the NFL’ last night.  They played a highlight reel from NFL Films with players and coaches mic’d up.  It’s great – you hear Tom Brady getting the team going pre-game, you hear him and Russell Wilson during the game, players on the sidelines, and some of the coaches.  It’s really good.  Of course, you don’t hear everything, just enough to tell the story.   I’d love to be the guy that edits it and gets to hear it all, uncensored!

Greg loved hearing what the coaches said and getting a peek at the play calling.  I loved hearing what they said to one another at the end of the game.  It’s real – it’s raw, unscripted emotion.  You hear (and see the love) as Tom Brady & Coach Belichick congratulate one another, you hear Julian Edelman tell Brady “You’re the greatest quarterback in the world”, and you hear Brady as he finds and congratulates Malcom Butler.  I felt like I was on the field with them and it was awesome.

It’s a shame Hollywood goes to so much trouble producing crazy reality TV shows, it’s all right here and it’s real.  Seriously, if you saw the parade today, you saw this – simply adorable, you can’t make this stuff up…and I can’t get enough!!!

2 thoughts on “Can’t Get Enough”